During the SPS IPC Drives in Nuremberg, the flagship event for the world of industrial automation (and beyond), the German company Beckhoff Automation introduced the new XPlanar system, destined to leave its mark, by transforming the handling of parts, pieces, and fluids in the industrial procedures.

XPlanar consists in fact of floating plates, which move freely over a surface of tiles arranged according to the project’s needs. This gives the plates unprecedented freedom in two-dimensional motion while avoiding any friction and without direct contact with the surface, thus making the new system suitable for several industrial applications: from packaging to assembly, from sorting to order picking procedures. 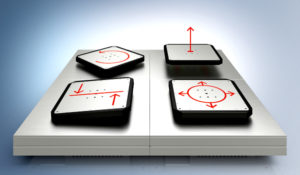 The plates can lift or lower up to 5 mm, tilt up to 5 ° to handle liquids, and rotate. The movements of several plates are coordinated by a collision-free logic that is programmed through the TwinCat software. The load can be moved from multiple plates, thus increasing the maximum weight supported.
The absence of contact guarantees the device not to be subject to rapid wear and it prevents the exposition of the surfaces to possible contamination, allowing its application even in extremely ‘sensitive’ areas, such as the food&beverages preparation and pharmaceutical sector.

This is a very important innovation that will primarily benefit machine builders, but the spread of which, most likely, will soon affect many other areas.

OK, still not like that, but it’s just a matter of time