Covid-19 in Northern Italy – so glad to see YuMi

YuMI – New application (with enormous social utility) for the collaborative robot developed by ABB: the multifunction device has been programmed to support medical personnel by automating part of the screening process of serological tests for Covid in the city of Milan. 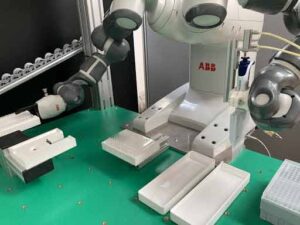 Specifically, YuMi deals with the “pipetting” of the well plates used in serological tests, reducing the load of repetitive actions that the operator would otherwise have to carry out and exponentially speeding up the procedures.

For the new “laboratory” tasks, YuMi uses an application designed by the Politecnico di Milano in collaboration with ABB and the Milan’s European Institute of Oncology, which developed the serological test. Andrea Zanchettin, Associate Professor at politecnico’s Department of Electronics, Information and Bioengineering, programmed the robot, which has the versatility characteristics that make it suitable for different applications, from the industrial sector to hospitals and analysis laboratories.

The new application of YuMi once again highlights ABB’s special sensitivity in terms of CSR and “socially useful technology”, especially on a territory – Lombardy – which has been strongly affected by the virus and brought to its knees by the slowdowns in the management of screening and by the overall inability of local institutions.