During the Mobile World Congress 2019, held in Barcelona in the last days of February, the Italian companies Exprivia | Italtel and Cisco and the Japanese robotics company presented the outcome of their partnership: the collaborative robot FANUC CR-4iA. 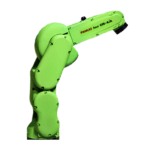 The new ‘cobot’, born from the union of skills among the Italian excellences in the fields of software and networking, FANUC and Electric80, a company specialized in factory automation, uses 5G intelligent networks and can be controlled through chatbots and vocal-recognition technology.

During the Catalan event, the participants were given the opportunity to witness the potential of the new robot, which is able to identify, grasp, and move objects and it’s able to visually recognize and analyze the items through visual sensors.

The industrial applications are clearly innumerable and revolutionary, and the integration of different technologies opens up stimulating perspectives, with functionalities destined to be exploited to an ever more significant extent with the advent of 5G new technology.

Great satisfaction has been expressed by Marco Ghirardello, General Manager of FANUC Italy and Vice President of FANUC Europe, who stated that “The key to success is through collaboration and integration of skills in different fields, which are united in the joint effort to make factories more productive and efficient. We have chosen Exprivia | Italtel as a partner, which ensures FANUC’s technological solutions have the most advanced connectivity features and can be easily implemented in even the most demanding IoT architectures.”